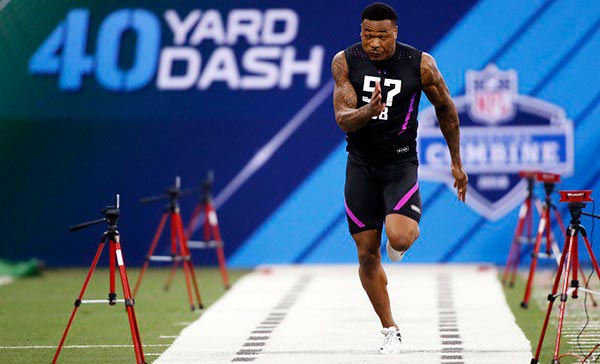 The dust has settled on the 2018 NFL Scouting Combine, and from what I’ve seen and heard about the nine former Seminoles who attended, it’s like the old Clint Eastwood film, “The Good, The Bad and The Ugly.”

THE GOOD
The obvious choice to start with is Derwin James (pictured above). He had a great combine, producing numbers not too far off those posted by former FSU star and current Jaguars standout Jalen Ramsey. What he needed to show was the athleticism that made him such a hyped prospect coming out of high school and was seen in flashes during his college career.

He looked good in drills and his measurables were good. One scout told me James was everything they thought he’d be; the team thinks if he focuses on one position or area of the field, he will excel. He started off the season as a seeming sure-fire top-five pick, but his status dropped during the season. With his strong combine showing, one would think he definitely has top-15 potential.

Josh Sweat was one of the guys who needed to have a good showing at the combine to increase his draft stock, and he did just that. One of the best things for a prospect is to measure and look like what has been portrayed. Most had him at 6 feet 5 and in the 240-250 range; his official measurement was just under 6-5 and his weight was 251 pounds, giving him that prototype edge rusher look.

He had said he was going to run a 4.4, have a vertical of 41 inches and a board jump of over 10 ft in the broad jump. He was close, running a 4.53 and positing a vertical of 39.5 and a broad jump of 10-4. More impressive was his short shuttle, which shows lateral quickness, at 4.28 seconds. This shows he has the athleticism to come off the edge.

Matthew Thomas was another high-rated recruit who didn’t necessarily live up to the hype. He did lead the team in tackles in 2016 and ’17, but had a lot of nagging injuries.

He was considered a bit undersized by some, but weighing in at 232 pounds shut that down. He also showed explosive power, which is never a bad thing during the combine. His 4.58 40 is a good time for a linebacker, and his vertical (41.5 inches), broad jump (10-9), three-cone drill (6.85 seconds) and 20-yard shuttle (4.28 seconds) showcased the athleticism that had him ranked as a five-star prospect coming out of high school.

What also helps him is that FSU linebackers have produced in the NFL of late. His stock should rise a bit over the next few weeks.

THE BAD
I expected Auden Tate to perform well. His measurables (6-5, 225 pounds) are impressive, but a slow time in the 40 (4.68) and a just-OK vertical of 31 inches didn’t help a guy who, with a good showing, could’ve potentially come away with a late first/early second grade.

From my experience, if you don’t think you’ll run well – I thought he needed a sub-4.6 – don’t run at the combine. His ability to make tough catches is what will get him drafted, but a good burst would’ve given scouts something else to like. Still, he has his pro day to improve on his numbers.

THE UGLY
Tarvarus McFadden performed at the combine like he did in 2017 – and that’s not good. He has the body that GMs covet in a corner in today’s NFL (6-2, 198 pounds). But his 40 time of 4.67 was alarming. He did have an impressive vertical jump of 38.5 inches, and that kind of jump doesn’t jibe at all with his 40 time. With the way he performed in the on-field drills, it almost looked as if it hurt him to run. The lack of speed makes you understand why it seemed like he was lost in coverage in 2017.

He will need to have an epic pro day to climb back up to the draft board. His preseason stock was so much higher. It’s like he forgot the combine was scheduled for when it was.

Rick Leonard putting up just 19 reps on the bench press isn’t going to get you drafted when you were an iffy pick at best anyway.

Ryan Izzo never really was utilized as a receiver in Jimbo Fisher’s offense, and while I questioned him declaring early, I don’t think the new offense would’ve used him much, either. Barely breaking 5.0 in the 40 (4.94) usually relegates you to a role as a blocking tight end. He didn’t wow in the bench press, either, with 18 reps, so there’s no telling if he’s even that adept in pass protection.

Others
Derrick Nnadi had an OK showing, but not to the level of others in his position group. Ultimately his film is what will push him up or down. I thought he’d do more on the bench (25 reps).

Jacob Pugh showed he is a good athlete. His lack of tape probably has him as an undrafted free agent, but how he performed, especially if he can do it again at pro day, will get him a camp invitation at the least.

The players listed in the “Good” section definitely have less to prove at pro day, but they still can improve their stock. Some cleaning up of techniques, familiarity with the drills and being at home (which should mean a less stressful structure) should produce better numbers. I do think Tate and McFadden will perform better.